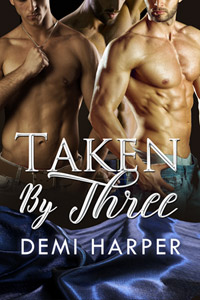 Kidnapped for revenge… Used for pleasure.

Evie is a good girl, but a spur of the moment decision has her heading home with a man she’s just met. Nicholas Lawson. Shocked beyond her wits, Evie is terrified to see that Nick has taken a detour and she has become the victim of a kidnapping plot.

Nick, Zane and Ryder have been planning their revenge for months. Years ago, Evie’s father sent Ryder to prison for a crime he didn’t commit and now the Lawson brothers are ready to slake their lust and anger deep inside Evie’s voluptuous body, making her their personal sex toy.

Can a captive win over her captors and find love in the end?

Evie sank into the leather seat, replacing the seatbelt. She shook her head. God must be punishing her for going home with a man she’d just met. If her mother was still alive, no doubt she would have been disappointed with her decision.

“Why are you doing this?” She glared at Nick.

“A score to settle.” He gazed at her, his expression softening. “It’s nothing personal, Evie.”

She nodded, keeping her eyes on him, while pushing her hand into a small opening of her handbag beside her lap. She rifled through, feeling for her cell phone. If she could somehow manage to dial 911, even if he caught her at least she could blurt out his plans for her, so the police would know where to look. Evie coughed, pretending to clear her throat in hopes of masking the sound of her hand shuffling through the bag. “Are you going to kill me?”

Nick laughed quietly. “I will if you don’t put that bag under the seat.”

She threw the bag to the floor, her phone tumbling out and rolling under the seat.

“Shit. You don’t have to look like that. I’m not going to hurt you. I just need you to cooperate a little with me. This isn’t going to be as bad as you’re thinking.”

Evie swallowed down her fear, finding an odd sense of comfort in his words. “Nick, if you tell me what this is all about, maybe we could work something out. This is kidnapping. It’s illegal.”

“Trust me, sweetheart, we’re definitely going to work something out.”

She frowned at his refusal to elaborate on the cryptic message. Silence filtered through the car and Evie’s head spun, devising methods of escape. Eventually, Nick must have seen the frantic look on her face because his hand slowly worked its way up her leg, squeezing her thigh. “Relax. I’ve already told you we’re not going to hurt you.”

She froze, her eyes bulging. “We?”

He didn’t get to answer. Whatever he was about to say was overshadowed by a loud beep resonating from behind the car. “Right on time,” Nick muttered.

Snapping her head to the side, Evie spotted a large pickup truck merging from an exit on the right. It was too dark to see into the vehicle, but her stomach twisted and she suspected she was staring right into the faces of the “We.”